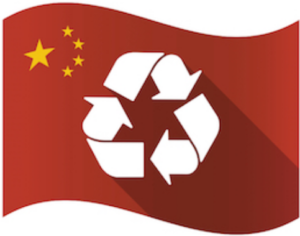 State and local governments in the US and around the world are in a tight spot regarding China’s recent policy updates on the quality of recyclable materials it imports. Businesses in places known for a culture of environmental stewardship, such as Oregon, are seeking waivers to dispose of recyclable materials that are no longer being accepted through overseas Chinese markets. These waivers may be granted depending on the results of market searches and potential sales elsewhere.

We’ve seen this line in the sand before when the Chinese government issued a campaign in 2013 called “The Green Wall” that was set to deter shipments of substandard and unclean recyclables, unusable scraps, mixed trash, and the like. Due to the government’s prior acceptance of contaminated containers with millions of tons of unsorted and impure bales of materials, China had established itself as a sort of dumping ground for countries and businesses around the world. This is especially prominent in the realm of toxic electronic waste dumping from computers, televisions, cell phones, etc.

This abrupt shift in market flow is placing a spotlight on US communities at risk of reduced diversion services or loss of these programs, altogether, which could reduce the value of the commodities and drive recyclables to landfills. With this trend potentially affecting more areas, residents and businesses will be called upon to rethink and rapidly adapt to changing purchasing habits and prioritize waste reduction goals.

Could this be just the push Americans need in order to change our disposable society?